May has been a very exciting month for all, last month Phillip spoke about the wild dogs that they have a den sight in the western sector. Two weeks ago the pups started to emerge from the den, I am very happy to report that there are eight new pups from the pack. Words cannot say how fortunate we have been to be able to view a wild dog den sight considering that they are one of the top ten endangered mammals on the planet. The sightings of the dogs have been phenomenal, to give you some insight on how the pack behaves now that there are hungry pups around. The pups will start to eat meat as young as two weeks so the pack being diurnal will start to hunt early in the morning, they have a very good success rate in making kills, It is very exciting to be part of a wild dog hunt there speed and endurance is amazing most of the time they out run the land rovers. Once they have made a kill they feed at a rapid rate and then run straight back to the den and regurgitate meat to feed the alpha female and the pups. 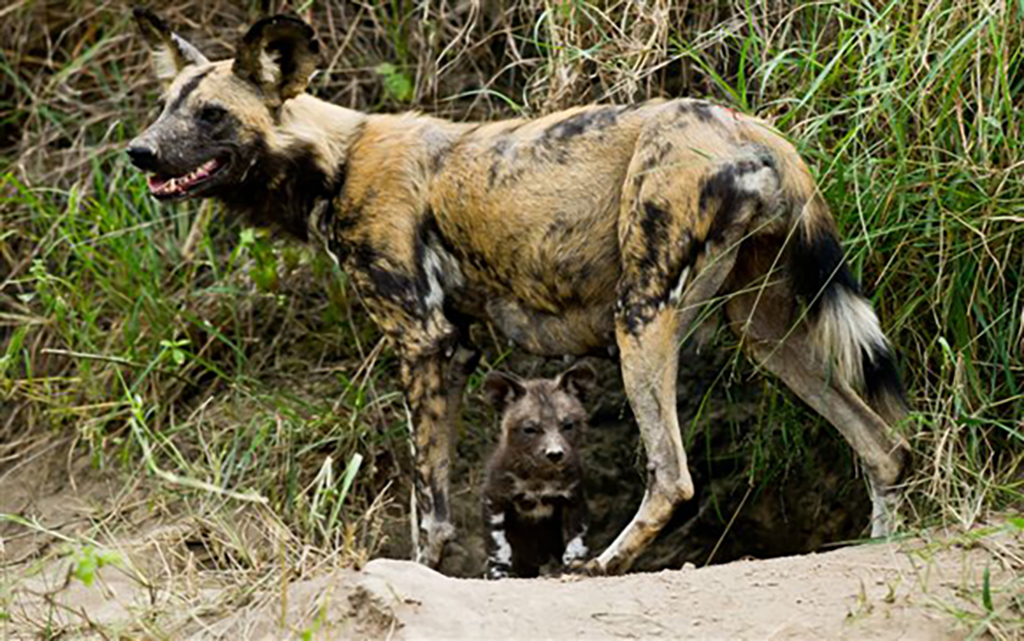 These animals are incredible in that they will look after each other if there is an injured dog they will feed it, and if it can't keep up with the pack they will wait for it, unlike lions were survival of the fittest is there daily way of life.

Even though the wild dogs were the main attraction of the month the lion and leopard sightings have been great, The ximungwe prides cubs are doing well one of the lionesses has been seen recently with very young cubs we should start viewing them in the next few weeks, we not to shore how many cubs she has. The Othowa pride has sadly lost the two old females, one was killed during a buffalo hunt and the other was killed during a territorial battle with another pride, so there are three young females, two young males and a young sub adult male left.

Hlabankunzi a female leopard has been see following a new male in the area called Xinzele she is literally throwing herself at him but he is not interested! We have had some great sightings of them together. Last week we found them together and as predicted she was flirting with him and trying her luck but he was not interested, eventually she tried the aggressive method she lashed out at him and gave him a few new scratches on his nose, but it still didn't work. He snarled at her for a while and then went to sleep in the shade. This behavior by the male has surprised many of us because a beautiful female leopard throwing herself at him and does nothing about it, makes you ask a few questions!!!

Our observatory evenings have been spectacular now that we are getting crisp clear winter skies. We have been viewing some great objects in the sky Saturn being the highlight in the evening and in the early morning we can see Venus, Jupiter, Mars and Mercury.

Hope you all have a good month we look forward to seeing all our repeat guests back home and meeting all our new guests and welcoming you the Ulusaba family.

Trevor and the Rangers team.