Wild dogs wild dogs galore our guests and us have been blessed with regular sightings of the wild dog pack in the recent few weeks.

The sightings have just been amazing, from witnessing them chasing impala, having stand offs with wildebeest, teasing giraffes, running circles around elephants just to name a few amusing views. 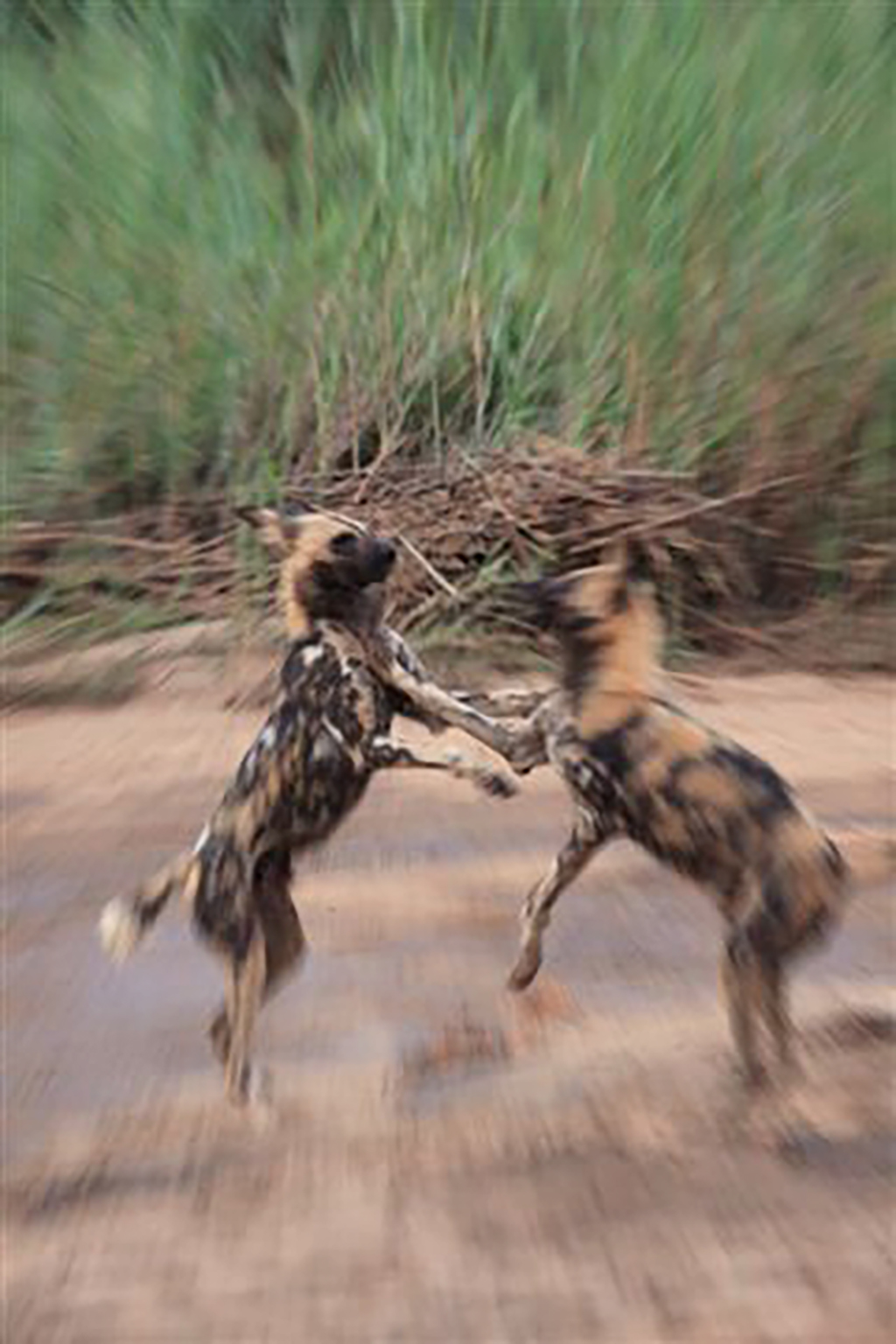 These very misunderstood extraordinary wolf like creatures are the second most endangered large predator (which the Ethiopian wolf is the most endangered) in the whole of Africa which makes a sighting of them even more appreciated and sought after, after almost 14 years of field guiding I still get goose bumps and very excited when viewing them.

The population of these creatures in the whole of the Greater Kruger National Park which covers 2.5 million hectares of natural wilderness are a mere 130 individuals which includes the pack of 7 were have been seeing so the odds of being fortunate to see them play around in their natural habitat around us is just wonderful!

They go under the general name Wild dogs (Lycaon pictus) but have a few other names such as Cape hunting wild dog, Painted wolf and African wolf.

Their unmistakable huge round ears are a clear I.D feature and their colouration patterns on either side of their bodies are different meaning the patterns on the left is different from the right, with their athletic body shapes and bushy tails with mostly white tips they can trot for very far distances exploring their surroundings and expanding their home ranges and in search for possible prey.

Their pack structure is very sufficient for hunting and they all partake in the event unless there are puppies at the den site then the Alpha female will care for the puppies and the rest of the pack will go out hunting and return with meat for the female by regurgitating the food for her to consume.

There are so much more to tell about these wonderful astonishing animals and just to top all of this, we witnessed them a few days ago running around in the bush and they picked up the scent of a leopard male with his kill they tracked him down, when they saw him with all their force they chased him away from his kill, chased him up a nearby tree and devoured his kill in front of him as he hopelessly stared at them from the safety of the tree, just to see wild dogs on game drive is amazing now to see them chasing a leopard up a tree, taking over his kill and mocking him at the base of the tree and seeing such interaction between two top predator species is just bliss!!!

Our wonderful lion cubbies are doing just great too, the Xhimungwe females are doing their best to keep their little bundles of joy safe & healthy.

The one female with her two male cubs which are about 10-11 weeks old paid a visit to her younger sister and her cubs which are still tiny about 7-8 weeks old, the meeting was tense as the younger sister is very protective over her little fluffy bundles, they were just next to the Tree house suite at Xhikwenga dam at Safari Lodge and had a kill and only the older cubs and their mother ate because the smaller cubs are still mainly only on milk, their tiny teeth are only visible now.

The other Xhimungwe female with her four new cubs that Greg saw a few weeks ago has not been seen with her cubs again but it's normal as the mothers would keep their cubs is secluded areas for as long as possible to keep them safe, hopefully she will bring them out of hiding for us to view.

As for our male cheetah, he has been scares and we have seen more wild dog sightings than cheetah sightings but with the three remaining Mapogo male lions patrolling their territory all over especially in the area of the male cheetah it's understandable that we don't see him as often and the presence of the wild dogs all over his home range makes him uncomfortable to come to our western area.

The Kashane male leopard trailed our cheetah male for two hours the other day, luckily he got away unharmed.

Metsi female leopard and her two cubs has been scares too, luckily we saw her and the two cubs one night playing on some rocks as if it's a jungle gym!

Hopefully we will see more of her soon; she is a stunning successful mother with her first litter.

As for Hlaba Nkunzi & her 1 remaining female cub we have seen a few times but her cub is getting old enough now to be almost independent which has caused a bit of tension between them as Hlaba Nkunzi wants her cub to spread her wings now & search for her own prey & eventually her own territory.

Another male leopard has made his appearance a few time in this area, he is about 5-6 years old, light blue eyes and very distinctive small ears, he is trespassing over Xinzele's and Kashane's male leopards territories and Xinzele trailed & tracked him down a few days ago and it must have been a huge fight as this intruding male ran for it's life andXinzele was adamant to get him, we didn't see the fight but we could see the aggression in Xinzele's face and body language!

There is so much happening everyday here in the wonderful wilderness of Africa and we all hope to share it with you all here at Ulusaba.

From the Rangers & Trackers team of Ulusaba!