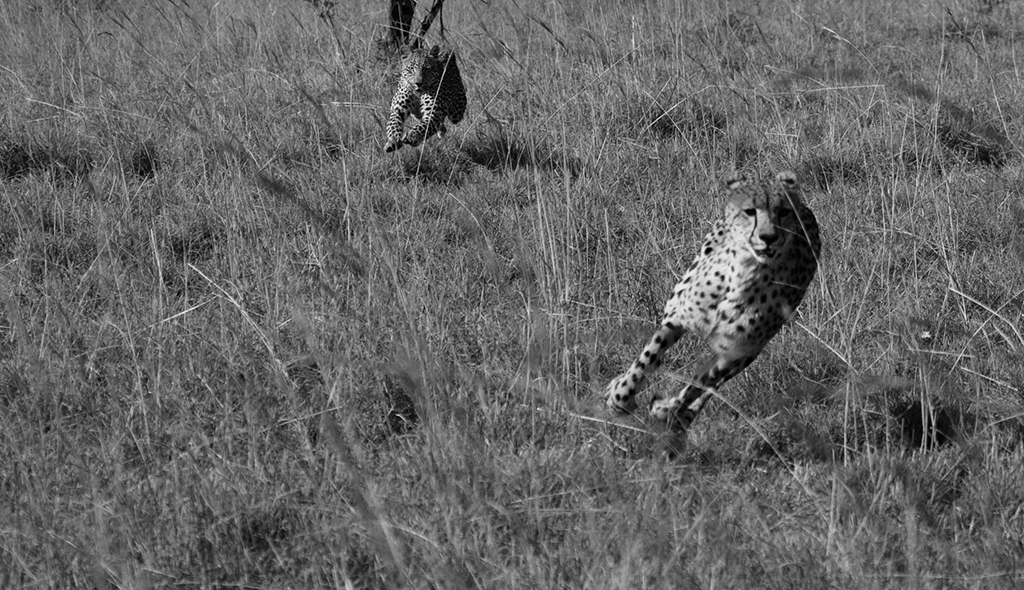 Our plan for the morning was to head to the southern part to look for a male cheetah that had been seen there the day before. With the sun on the rise we worked around the open areas for fresh tracks but it was much later on in the drive that we found tracks that showed the direction of where our elusive cat had headed. We looped ahead and finally found the magnificent speedster on the move but only managed a couple minutes with him before he suddenly took off after waterbuck.

We lost sight of him while trying to negotiate through a thicker area but when we did find him he was in the process of killing a young waterbuck male of about two years of age which is a big animal for a lightly built cheetah to take down! We watched as the cheetah negotiated the last of the prey's struggles before sitting up to survey the area around him in case of the approach of other predators. Happy he was safe he settled down to start feeding and that's when we noticed a movement in the grass near to him. A female leopard, the scotia female, had picked up on the activity and was stalking in for a closer look. We barely breathed as the smaller but more powerfully build leopard stalked the unsuspecting cheetah who was trying to open up a spot in the waterbuck's shaggy coat to begin feeding.

The cheetah suddenly sat up and scanned the area where the leopard was hidden, aware that something was amiss, and began growling and hissing at the leopard who now sat up and growled back. The leopard suddenly charged the cheetah that turned and sprinted away but stopped as soon as it realised the leopard had turned to head to the carcass. The cheetah came back to the area and again began to snarl to which the leopard again replied by charging after the cheetah.

On returning to the carcass the leopard, who was now panting heavily, started dragging the large antelope which could have easily been triple her weight. Amazing! The cheetah watched this from a distance and again came in growling and again the leopard charged and this time chased the cheetah for easily 200 metres before walking back to the carcass. We left the two lying apart panting while we headed off to settle our pounding hearts.

Truly an astounding interaction and a once in a lifetime sighting.

Thanks to Ranger Brandon for sharing his photos