This is a story between two different predators, both at the top of their respective food chains.

It was late in the evening drive when I got the call from one of the other guides, that he had found a spotted-eagle owl that looked as if it had been hit by a car and had a broken wing. Having a soft spot for my avian friends, I headed straight there to see if I could help. On arrival, I found the bird lying on the road and with help from the other guide, we rapped the poor bird up in a blanket and he sat shot gun with me as we drove home. I walked around with him for a short while, giving the staff a chance to have a look at him. 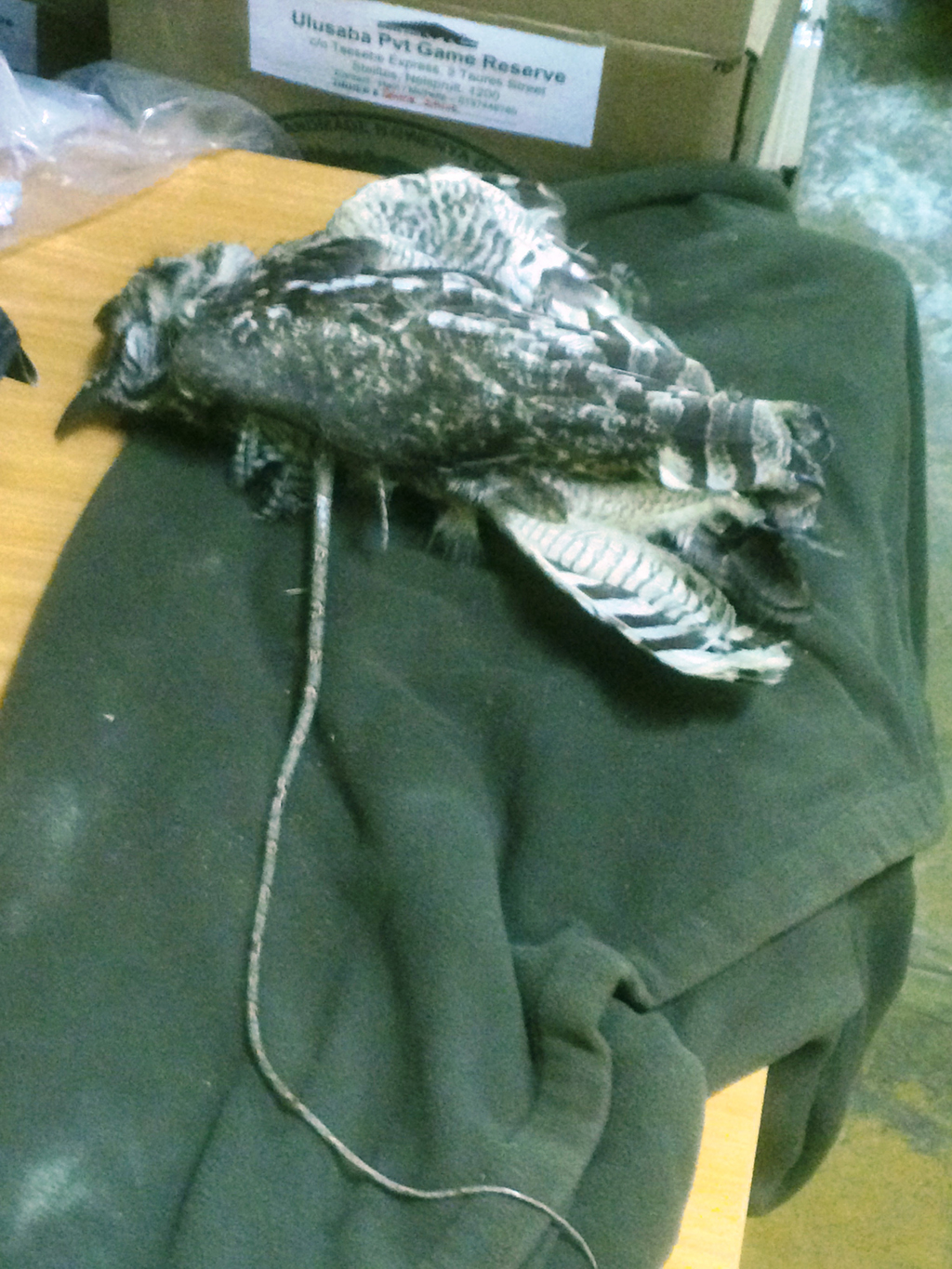 Once I was back at the Ranger's office and I'd secured my hands with a pair of leather gloves, I unwrapped the owl to see if I could have a proper look at his wing. As I unwrapped him though, he passed out and my heart sunk as I thought he had just died on me. It was only then, when inspecting the body in the light, that I found what looked like a weird tail, and so, as you do, I pulled it. It was only then that I realised what was going on. A vine or twig snake had managed to wrap itself around the poor owl and was holding it tightly! I had no idea where the head of the snake was and I wasn't too happy looking for it on my own and so I called our General Manager, Karl, and the two of us started putting the pieces of the puzzle together.

It looked like the owl hand managed to catch the snake on the head, but hadn't caught it properly and so hadn't killed the snake. The back talon of the owl went into the back of the head of the snake and out the side and so must have missed the brain. In defence, the snake had wrapped itself around the owl and was squeezing it tight. The snake is not a constrictor though and so it didn't have the mass crushing power of something like a python. The real question was though, had this back-fanged snake managed to puncture the hard scaly foot of the owl and actually bitten it? If so, the haemotoxic venom would have already started liquefying the bird's insides.

I moved the struggling pair to a more "comfortable" spot and we then waited to see what would happen. At this point the owl was still passed out and we weren't sure if that was it. After about half an hour some of the other Guides returned and so we all had a look. It was then that the now "dead" owl came back to life, surprising all of us. It hissed at us and managed to, for the first time, extend one of its legs. The snake was not moving anymore at this point and by moving its leg, the owl must have loosened the snake a little. Over the next half an hour, we watched as the owl gained more and more of its strength.

We all sat around the fire and decided that we were going to remove the snake from the owl and see if it helped at all. When we went back to do this, both owl and snake were gone! We searched high and low and thought maybe a genet or another small predator had seen an opportunity and grabbed a free meal.

It wasn't to be though as I found the owl hiding under a bush in the garden. So I suited myself up again with leather gloves and with the help of the other guys, we tried to catch the owl. It was having none of it though and hissed us angrily. The owl then tried to make itself look bigger in a defensive posture, in doing so, loosening the snake even more. It then took two or three hops towards us and then took off, flying through the group and up and over the next door neighbour's roof. We heard something drop and ran around to find the now dead vine snake on the floor. The snake was a massive specimen for the species with a length of 1.1metres.

If I had originally known what was going on, I would have left the owl and the snake to their own battle. But in a way I am glad we did, as we got to watch one of the most interesting little wars between two incredible creatures.