The terrain of the bush with its lush green grass and beautiful full trees has begun to change ever so slightly as we edge closer towards winter. We can see the grass beginning to become dormant as the leaves slowly begin to fall from the trees. The sunsets have become truly spectacular due to the fine dust in the high atmosphere. The mornings are beginning to warrant the use of warm jackets and in the evenings, a fleece doesn't go out of place. There's nothing quite like setting out on a crisp morning game drive just in time to witness the sun appearing over the horizon perhaps accompanied by the call of a lonesome lion.

With the prides occupied with raising their young, they have been moving extensively over the reserve in order to secure kills and assert their territories. The Ottawa pride has been spending much of their time hunting north of the Sand River in the old grounds of the Sand River Pride. This area is prime habitat for Cape buffalo as they prefer to wander amongst the reeds and rest in the many shady spots along the river. The pride was found lying by Bejane dam and it was obvious something drastic had happened during the night. Several of the females had fresh puncture wounds on their bodies as well as a few gashes on their legs and one of the smaller cubs had a badly swollen face with its bloody tongue protruding from its mouth. In the night air sounds of lions feasting came from the river bank and when we arrived the picture became clear. 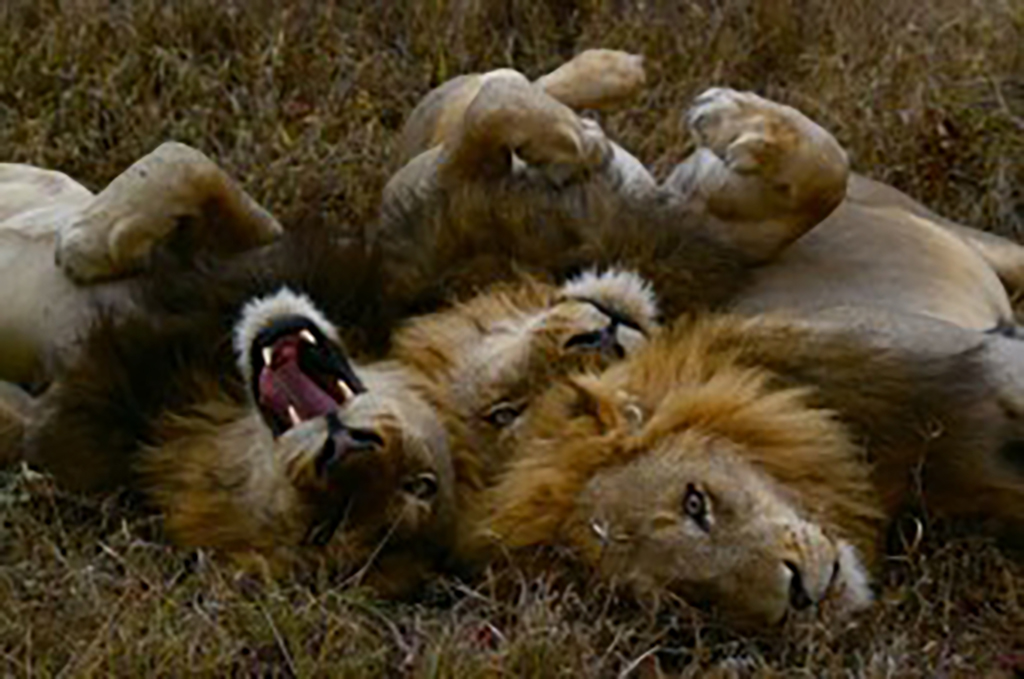 Three of the Mapogo male lions were busy devouring a buffalo carcass with plenty of meat left. They must have forcibly driven the pride off their kill and injured all those that didn't move quickly enough. They don't call them vigilantes for nothing! After watching the three feast for a while we returned to the pride and watched them move a distance away with the injured cub trailing behind. I was very happy to hear that a couple of days later the cub was seen suckling from its mother so hopefully it will pull through. The Xhimungwe females have mostly been separated with the two females raising their cubs and scattered sightings of the other females. Three of the females along with three cubs were sighted recently along the banks of the Mabrak River by River 4 at Safari lodge! One of the females also came into estrus this month and enjoyed the attentions of the Mapogos. We watched the pair mate one afternoon from the bar at Rock lodge in the late afternoon light yet the next day there was a different male attending the female. Myself and Johan followed track for a lone male as he moved north from Rock lodge and headed towards dam 3. The dew still clung to the grass and the trackers followed the trail left in the grass. We drove around towards the road just south of the river and picked up the fresh tracks moving along the road. Just ahead we spotted the male striding along with the sun on its back. He was moving with great purpose and seemed to be following a scent trail possibly for the mating pair. Abruptly he turned towards the river and Johan and I took positions along the bank. The lion approached the water tentatively coming close to the rushing water. He lowered his head and growled at the water for several seconds before finally taking the decision to cross. In an instant he jumped into the full flow, disappearing below the surface for an instant. His head came up and we saw as he make a few deft strokes and emerged from the water on the other side dripping with water framed by the perfect backlight. He disappeared into the dense reeds and was gone. He must have joined up with the pair sometime that night and taken his place as her consort because the next day both males had several lacerations on their face and arms.

Having access to relaxed leopards with cubs has been amazing these past weeks. Being able to watch them grow up and learn from interacting with each other and their environment is a great privilege. Makubela has proven to be a very attentive mother and has managed to steer her cubs from danger while securing several kills for them. Along with her secluded hiding spots, she has thankfully also been leaving the cubs in a tamboti thicket in an open clearing making for some memorable photo opportunities! While she goes off on her hunts, the cubs have been more than happy to play hide and seek with each other as they learn how to stalk and kill. The trees have provided hours of entertainment as they practice their climbing abilities and chase hapless birds and lizards around. One afternoon we watched them playing around until at one point after the sun had set, they both stood next to one another staring off in the direction on the hills. We were hoping to see Makubela returning from her hunt, as I'm sure were the cubs. When they realized there was no sign of her return they went back to their play and we left them as night took over so they could have a fighting chance at survival. Mabiri is still quite healthy and her cubs as getting nice and strong too. She was seen recently by Duard trying her luck at stalking a male waterbuck!

Some great news is that Metsi (Mabhiri's previous female offspring) has given birth to new cubs! We are still not sure of how many there are but she had been seen in the hills opposite Safari lodge with little kittens moving at her paws. I look forward to seeing them soon!

There have also been sightings of some of the more elusive animals like a relaxed male honey badger by Duard and an African rock python on top one of the hills. One of the highlights these past few days has been the presence of a rhino carcass in the southern plains. One of the Mapogo males managed to scavenge it along with an Xhimungwe female. They defended the carcass from the attentions of several dozen vultures and two persistent side-stripped jackals. At one point the male was so full but just didn't want to leave the kill in case the vultures moved in. He would walk a few paces away with several vultures advancing in his wake to devour the carcass until he would turn to chase them away. This continued for several minutes until he got tired and moved off to lie down. The vultures took this as their cue and attacked the meat with loud screeching and clawing. This didn't impress the lioness that bolted into the fray sending vultures flying off for their lives! Eventually the lions left the carcass to the vultures and they made short order of it, managing to strip it to the bone in a matter of a few hours. Later the jackals moved in and recently a small clan of hyenas finished the work of stripping the last of the meat from the bones and scattering the small bones. All that is left now is the skull and large bones and a small section of the tough hide. Its seems that the bull rhino ran and stumbled into a deep ravine casing it to succumb to its wounds.

The wild dogs have been pretty elusive these past weeks for good reason; they are denning in the north eastern section of our neighboring concession. There are six adults with 6 new puppies! Hopefully in the next couple of months when they start moving away from the den we will be able to get our first views of these cute killing machines.

It truly is a special time to be visiting the bush and we look forward to seeing you here soon.

Warmest regards from Phillip and the ranger and tracker team