No sound to be heard, no breeze blowing, the heat is extreme, the atmosphere just hanging in the midday African heat! Birds, animals & even insects are taking cover from the heat wave.

Clouds are building & forming huge columns giving the promise of rain but alas Trees, shrubs & plants are fighting for moisture from the morning mist for survival.

Temperatures averaging 48 degrees Celsius & higher is the norm until... 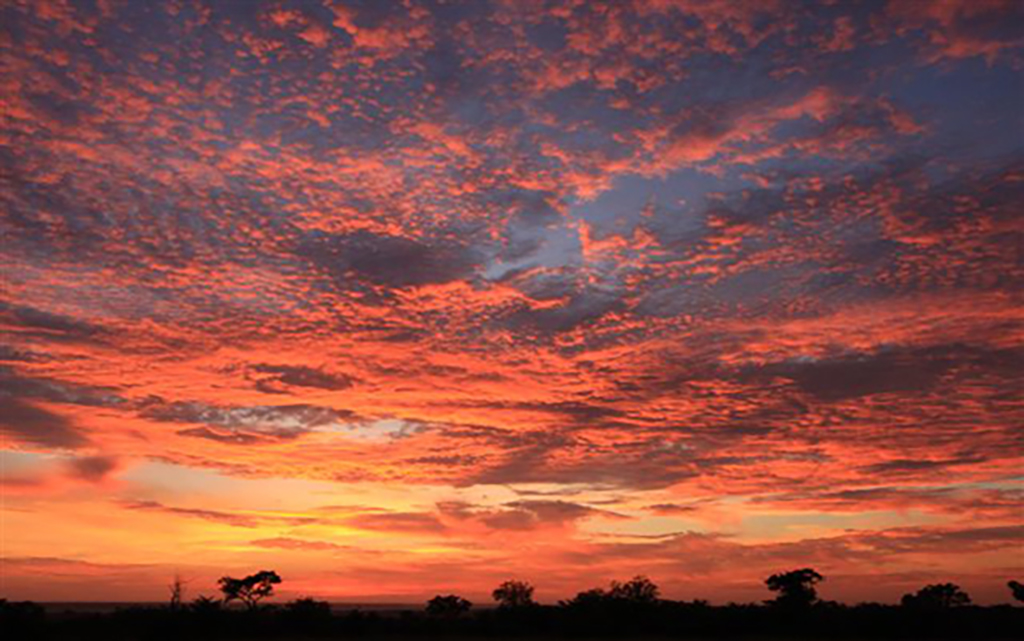 Cumulonimbus clouds building up with force, thunder rumbling within them, heavy dark Nimbostratus clouds advancing on the horizon, blocking the rays of the scorching sun.
Unstable strong winds blowing these clouds towards the dry land.

With the air covered with dark heavy rain clouds, static electricity & winds blowing in all directions everything comes to a dead halt, as if the pause button has been hit just silence yes silence

The silence before the grand finale nature waiting for her next response...

The heavens open with force, drop after drop, huge rain drops descending with force down onto the thirsty dry land, each drop is charged positively with Nitrogen by the lighting within the clouds. These Nitrogen rich water drops will be soaked up within the soil for the flora to use for new growth

The rain didn't stop for 3 hours, quenching the thirst of the soil, cooling down temperatures, giving the fauna & flora a chance to rejuvenate with this amazing natural event!

Life has been restored in the African bush the evidence were clear the next day with the tiniest of leave buds noticeable on the trees, the wet soil became alive with insects emerging, millipede activities aplenty, ground burrowing scorpions cleaning out their homes, dung beetles searching for there precious food supply

We saw an Impala female giving birth from a distance & viewed the new critter stumbling on its unstable new legs to suckle for the first time...

Metsi & Hlaba Nkunzi female leopards are doing absolutely great with holding their territories, looking after their cubs & feeding them. Hlaba Nkunzi had a few encounters with the oldest Mapogo & the Xhimungwe pride where they stole her impala kill & Metsi's cubs naughtily dropped the kill she had out of the tree which hyenas stole, she wasn't very impressed with her two little critters. Tegwaan male leopard had his paws full with the 4 Xhimungwe females & the old Mapogo when they chased Tegwane up a tree & waited at the bottom of the tree for him to come down the whole morning.

Between the Mapogo's, Ottawa pride & Xhimungwe pride the buffaloes has been under attack with at least 1 buffalo killed every 4 days on separate occasions by these lion groups. We are not sure where the 1 Xhimungwe lioness's cubs are but we hope they are still alive? The other Xhimungwe female with cubs killed a young giraffe recently so they are doing just fine.

We were blessed with an amazing wild dog sighting in the Sand River where they played & chased each other all around.

We even had an extremely rare sighting of a female ostrich wandering around the reserve not knowing where to go, not even to mention 2 reported sightings of a male Pennant winged nightjar which is extremely rare to see in Southern Africa.

With the transformation of the African bush most of the migratory birds of prey & other bird species has arrived, the breeding season is in full swing with the males shining bright with their colourful breeding plumage & eager nest building activities, a wonderful phenomenon to witness the arrival of the notorious Woodlands Kingfisher with its peculiar & distinctive call & astonishing beautiful turquoise wings.

We are all fortunate to experience & witness the wonders of Mother Nature & her ever changing activities wish you were here to experience it with us.

From the ranger & tracker team here at Ulusaba!