Hello again from a very sunny and warm Ulusaba in South Africa!

February is generally regarded as one of the hottest months, and this year that has certainly been no exception, with temperatures reaching the upper 30C, and even occasionally soaring into the mid 40's. With this though, there are also pretty spectacular build ups of thunder clouds, and some relief in the form of late afternoon thundershowers, once again bringing the Ulusaba bushveld to life. The Marula trees are all still fruiting. These fruits are thoroughly enjoyed by all the animals, including birds, antelope, warthogs but especially the elephants, who'll walk from one tree to the next in search of these tasty treats! 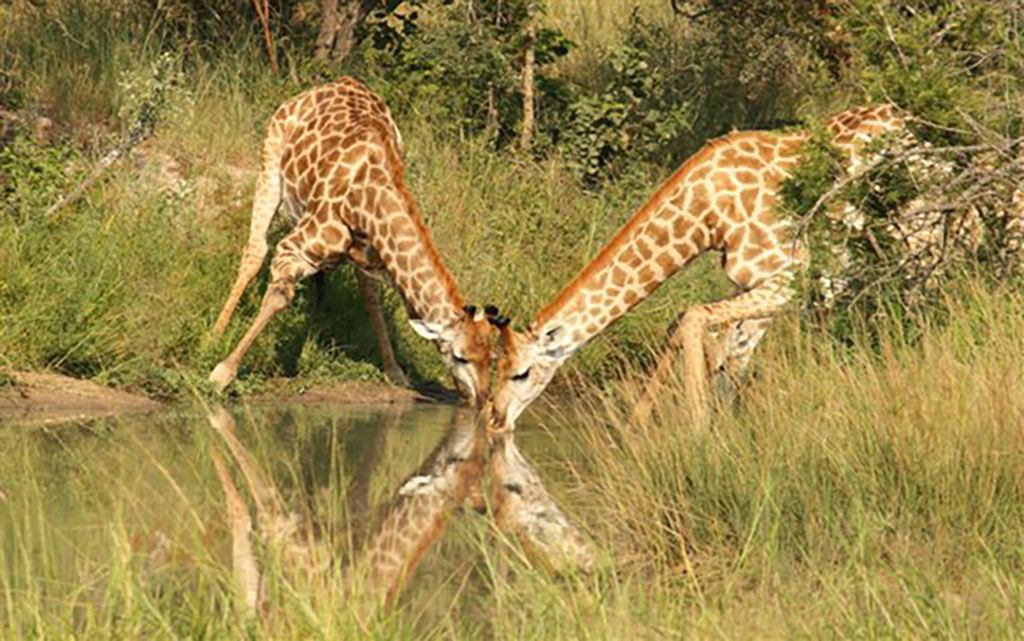 On our way down south one morning to view a male cheetah, which turned out to be posing for us classically on top of a termite mound in the early morning golden light, we found a Marula tree with the biggest and most tastiest fruit, which our guests all really enjoyed. When I told the other rangers about it and where it was, they were equally excited, but as it turns out, Trevor had known about this tree for a week already and was keeping it a secret...very sneaky!

One of my personal favourites, the Cape Hunting dogs, continue to grace us with there presence in the area. This morning, Johan followed them for more than an hour and watched 5 of them hunt and kill an impala. One of the 6 managed to catch it's own and called the rest of the pack back to help him finish off his own catch, and chase away a hyena, before they all returned to finish the remains of the impala, which is when we caught them running down our main access road. Sam also found them mating one afternoon, and I was luckily close by to be able to view this rare spectacle. So far this pack has managed to elude the Ximungwe pride and lets hope that it long continues!

The herd of about 400 buffalo has also been around of late and there are many new additions as we've seen some day old calves in the herd. One afternoon we found a cow going into a small wallow to cool off after a hot day and the little calf blindly following into the sticky mud. Luckily the calf was able to get out, but not before making several failed attempts. That same afternoon we saw a male leopard (Lisbon male) not often seen in our area, which earlier had been seen eating one of the afterbirths from one of the buffalo. Male leopards have been known on occasion to even sneak into the middle of the herd and pick-off small calves without even being noticed!

Mbhiri female leopard and her year-old female cub continue to impress. One afternoon while watching a rhino at a waterhole, I noticed something in the long grass on the opposite side of the dam. On a closer inspection it turned out to be the cub! We watched from a distance as it stalked after the birds at the waterhole, and as we neared found her mother to be present as well. Trevor joined as we watched the cub, still obsessed with trying to catch a bird, as it climbed a Marula after a Burchell's's coucal, which teased it all the way to the top of the tree before flying off.

One afternoon we found the Ximungwe female lionesses on our airstrip, cooling off in the shade of one of the plane's wings, and was great to catch them still there the following morning in the beautiful early morning light. There are some new additions to the pride, which we've only heard in the thickets of where their den is, however we believe won't be long before we see them! The lioness whose missing the tip of her tail, still has her 3,5 month old female cub, which always seems to entertain us when the rest of the pride are trying to take a cat-nap. Last week we followed the mother and cub back to the remains of the wildebeest kill, following a long drink in the riverbed. The biggest of the Mapogo male lions was feeding on the kill but soon had his full and collapsed on the ground next to the cub. The cub could not resist playing with the end of his tail, and at one stage was almost swotted off it's feet. Fortunately the lion was very tolerant of the cub's curiosity and let her play until she lost interest!

A couple of weeks ago in morning Trevor tracked and found Metsi female leopard and the Tegwane male mating very close to our lodges. We followed their progress as they stayed together for a 4 day romance. She's still a young leopard, but would be phenomenal if she were to conceive, as she seems to have taken residence around Ulusaba, sharing Makwela's old territory with the HlabaNkunzi female (Makwela's most recent daughter), which we believe to have cubs and I'm sure is a matter of a couple of weeks before she starts introducing them to her kills and for us to see!

Yesterday, while driving along the Sand river, we heard the an incredible roar of hippos fighting. My guests Brian and Mindy captured some awesome footage of a hippo bull confronting another bull. The sound and interaction between these two animals was phenomenal, as we looked on in awe for more than half an hour.

As you can see, there's so much going on, and it's a real privilege to be able to be able to be here to witness it! We hope that you'll visit us again soon so that you too can share some of these breath-taking moments with us!

Cheers for now, Greg Whelan, on behalf of the rangers at Ulusaba