Cat fights in the bush

As we near the end of winter and the long dry season, we are starting to see subtle changes in the bush hinting at the coming re-birth the rains will bring. The weeping boar bean trees are all in flower with many birds and primates attracted to their sweet flowers. The leaves of the jackal berry trees are also turning orange and yellow, highlighting the scenery along the river. 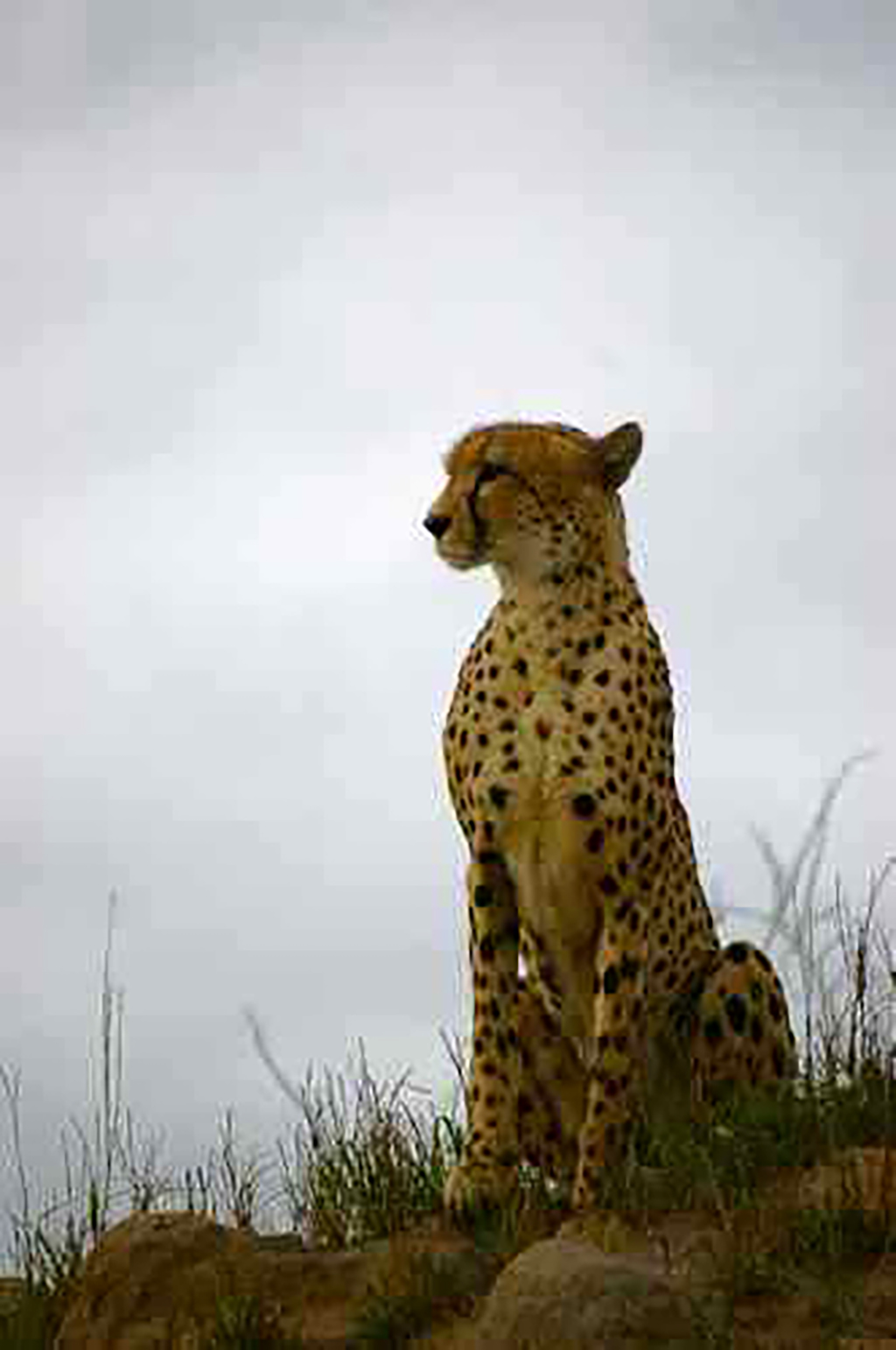 The kudu and giraffes have been enjoying the new growth of leaves on the bush willows around rock lodge. It has become a common scene in front of Safari Lodge to see herds of impalas, kudus and nyalas browsing around the camp pan. A while ago a herd of buffalos came down for a drink while the guests enjoyed their afternoon tea!

Xlabankunzi has been dominating the areas surrounding Ulusaba and further south of the reserve. She has faced little opposition from other females up until recently. The Mitsi female who was one of Mabiri's offspring has also been sharing this territory. The escalation in territoriality may be due to fact that both females have cubs. Each mother is trying to defend the prime hunting grounds so that their cubs can survive. One morning Greg and myself started following tracks of a female leopard from the base of Rock lodge. It soon became clear that there a second set of tracks joined up with the first. We sent the Joseph and Kaizer in on the spoor as we checked the surrounding roads. The tracks led past Safari Lodge and through the Mabrak River where it seems like the tracks converged and a fight took place.

Once we had a good idea of where the leopards were, the trackers re-joined the vehicles and we searched along the roads for any further tracks. A short while later, Xlabankunzi was seen walking slowly out of the bush. She was limping lightly and had a number of gashes on her front legs, there was also a puncture wound on top of her head and the skin from beneath her chin gaped open with fresh blood trickling down her neck. We watched as she gingerly lay down against a termite mound in an open field. She lay on her back and kept her paws in the air while she panted deeply. Leopard fights can be quite vicious yet are often over within seconds. It was a hard sight to behold but an important part of nature. We only wondered how Mitsi was holding up as we weren't able to find her that morning. A couple of days later, Mitsi was seen with her two new cubs far south of Xikwenga dam with no obvious wounds. I saw Xlabankunzi yesterday leading her two cubs along the Mabrak River in the late afternoon sun and although her skin in still hanging open, the wound seems to be healing nicely and the limp in gone. At least now the two leopards know who is more dominant and can raise their cubs in their respective territories.

With the arrival of the 5th member of the male lion coalition, the fate of the last Ximongwe pride cub was sealed. Having lost their cubs, the males are back in estrus and have enjoyed the attentions of the mapogo males. The females from the Ximongwe pride have all been mated with and we are expecting some new cubs if the matings were successful by the beginning of the New Year. The morning when we found the leopards had been involved in a skirmish, two mating pairs of lions were found around wallinford dam. One of them had fresh wounds on his legs and paws as well as a deep cut under his jaw. When a male finds a female in estrus he becomes her consort and will defend his mating rights against all takers. One of the coalition must have tried to steal her away during the night. It was incredible to think that so much fighting has occurred on the same night so close together!

There was more lion action up by dam 3 close to the river on morning when one of the lion males led us on a race through the bush for almost an hour. We started following him from the airstrip when he began to cut straight north into the bush. We managed to follow him as he trotted down a hippo path leading towards the river. Eventually he emerged by dam 3 and started sniffing around. Soon 3 females from the Ximongwe pride appeared along the road and they met the male coldly. After this mild reception he started scent marking the bushes and lay down next to them. Moments later, another male from the coalition strode towards the females but he first male moved towards him. They stared at each other intently both marking the bushes a distance from each other while the females watched with interest. They eventually settled down to rest for the morning. There must have been an altercation between the females and the male casing the other male to run to investigate.

The firebreak has proved to be a safe haven for cheetahs and we have enjoyed several sightings of the older male as well as a young male from the east. The young male was sighted walking the firebreak one morning when he managed to kill an impala ram. When we returned later to see how much he had eaten, we were surprised to find a hyena close to the kill. The cheetah hadn't seen it yet and we watched as the large hyena picked up on the scent trail of the kill. He sighted the cheetah first and rushed in to chase it. The cheetah growled deeply and gave a mock charge just as the hyena turned its attention to the kill. Accepting defeat, the cheetah strode away and we followed it onto the clearings where it continued walking to put some distance between it and the hyena.

The Ottawa pride has provided us with amazing sightings as they continue to hunt the buffalo bulls that roam the banks of the sand river. The numerous vultures perched in the trees led us to the kill. We found the whole pride on the kill each vying for the best feeding spots. The two males were busy feasting at the head while the females had opened up the belly. One of the cubs was missing until we saw it emerge from the carcass! Despite being a closely bonded group, there was lots of growling and fighting as the kill gradually got consumed. One of the cubs got a bit too close to one of the males and got a paw to the head as a reward! After a few days the lions abandoned the kill and settled down by the river. That night we saw 5 hyenas move in to clean up the bones. Their power was evident as they cracked the bones and ate the marrow. The river has turned into a killing field as another bull was taken by two of the male lion coalition a couple of days ago.

The pack of wild dogs have been giving us amazing sighting as they roam in from the east on occasion to hunt with their pups. Their lives are not without risk as they have been sighted in close proximity to some of the predators. They managed to tree a leopard one day but this morning one of the pups was found hanging onto life on the firebreak. Three females from the ximongwe pride were seen walking north from the area. The females were intent on making a kill and we watched them hunt two herds of impalas with no success. Lions remain one of the greatest threats to the continued existence of the wild dogs.

There are lots of elephant herds in the reserve at the moment with several babies who seem to like nothing more than fooling around with each other for our delight! Some interesting animals have been seen like dwarf mongoose, genet and honey badger. Wooly necked storks as well as ground hornbills and a pair of secretary birds have been seen as well.

We await the start of the rains and enjoy the cool mornings and warm afternoons. We look forward to sharing this wonderful place with you and hope to welcome you soon.

Regards from Phillip and the ranger and tracker team