Probably the Easter bunny, and he's bringing more sun with him.

The last time I wrote, we were in the midst of a 'heat wave' here, where the temperature rocketed to a balmy 8 degrees in the village. We had our shorts on and everything. Now, I also said the long term forecast had no snow. Well, that was a bit of a lie.........

So, the sun did shine, for about 6 days, and then surprise surprise, the snow re-appeared. As I have said in every blog to date, it has been incredible, and I did promise more summer-esqe pictures in this blog. However, that has been severely limited by the fresh snow! The snow fall since we last spoke has been about another 2 foot!! So, here is a new picture, and one of my favourites, is of ski tracks over the back fence, just after the snow: 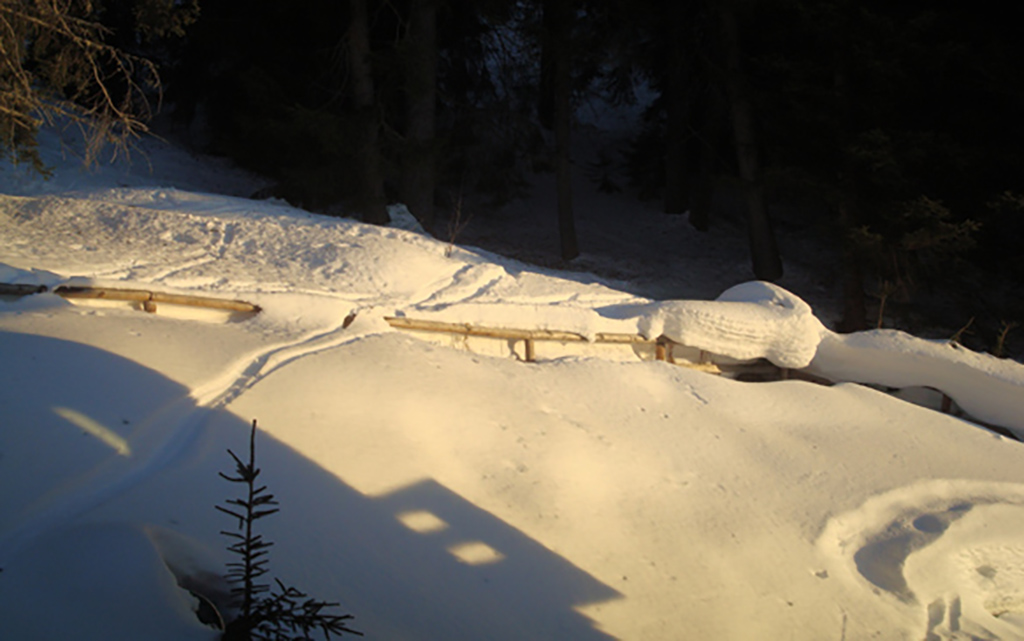 The guests are continuing to have several of their best days ever. Its a special point you reach in your skiing career when you are able to pinpoint 1 day as 'That day.' It's kind of like catching the perfect wave, or from the Ulusaba guys, some of that game viewing sounded pretty special. I have had 'that day' this season I think, or at least top 5...... Kat had 'that day' the other day, when she managed to ski all the way from Ruinettes to The Lodge, a first, and breakthrough in her skiing career. Good job!! Gerwin has started to 'ski' up the mountain, putting 'skins' onto the bottom of his skis and gliding all the way from The Lodge to Attelas (that's 1200 vertical metres!! Ouch.) Paul has rediscovered a lost love for skiing this season, discovering the nearby haven of Bruson, which is covered by the Verbier lift pass.

As we start to wind up for Easter, and down for the season, I cannot believe where this winter has gone. Last thing I remember we were getting excited about the early season snowfall, and that was in October, now here we are 6 months later, with late season snowfall, and getting excited about bikes and tennis racquets! It will not be long until the blogs are filled with stories of Paul's tennis serve, Gerwin's running feats and Will and my biking tales. The resort has one final push over the next few weeks with Easter holidays, and then we empty out all the seasonnaires and skiiers.

There is some better weather today, this is what we woke up to this morning:

Not too bad!! This also means that the extended forecasts are saying no snow for the next 10 days or so. This means incredible spring skiing, and perfect pistes that ski really fast!! The spring conditions mean its getting a little bit slushy towards the end, but the pistes up high are in great conditions. Its also time to start getting ready for BBQ season!! Guests can look forward to Gerwins great barbies, sunning themselves in the hot tub and beers after skiing. All sounds pretty good to me!! There is still time to come and play with us, the last 2 weeks of April have been opened up as hotel style weeks. Get in touch to come and stay, and enjoy the best spring skiing conditions for decades.

On that note, I am going to sign off, and enjoy the sun, and the snow!! Come see us soon, and dont forget to bring your sunnies. Until next time.