Since we last spoke, we have had more sun than you could shake a piste ski at, and it looks due to continue. The snow is all melting, and the rivers flowing down the valley are raging. Looks like its all shaping up to be a pretty good summer. And its only April.

As I signed off last time I promised some more summer based pictures. I have been trying my best to get out there in the late ski season and take some summer pics and have also been rock climbing and biking, just to prove that I could so early in the year! Don't get me wrong, the pistes above Ruinette and around Gentaine are still skiing well, but its time to look forward to some summer-based activities now. We went for a bike ride the other day, and the Route de Soleil from Verbier to Le Chable is open, with little snow on the road.

We went rock climbing at a local rock called La Balme, which you can see the top of from The Lodge, and despite having to walk in through the snow, the base of the rock is sheltered by an overhang, so it stays dry and snow free year round. The rock was lovely and warm, as it is a little sun trap up there, and there was no one in sight, all you could hear were the eagles calling, and the rivers flowing. 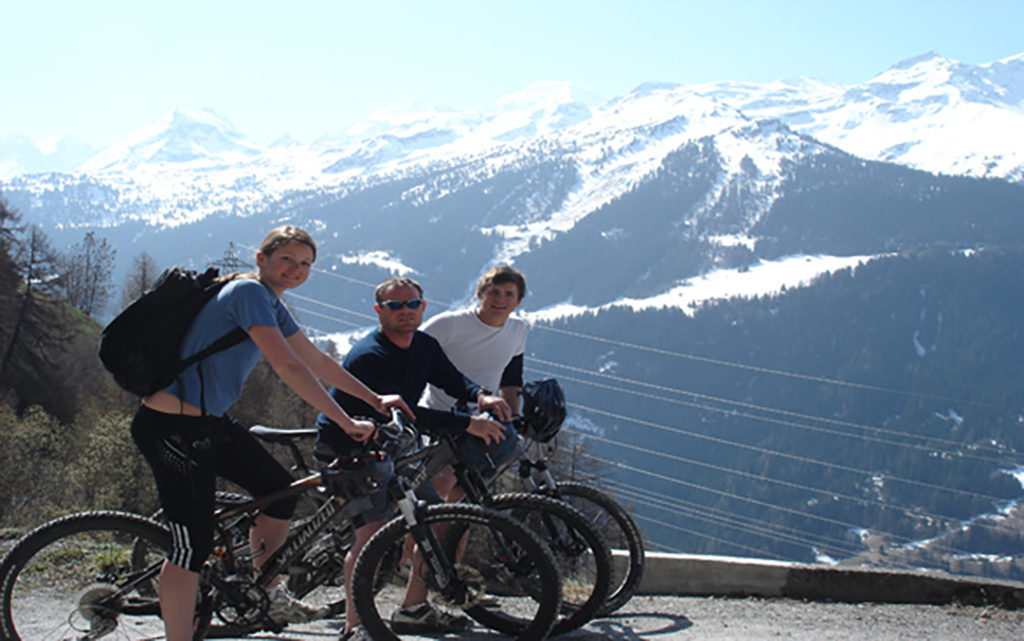 The biking trails are opening up on a day-to-day basis, as more and more snow melts, this particular one runs from the far side of the village all the way to the lift station at Le Chable, so there is none of this riding up hills nonsense, just hook the bike onto the lift and up you go. Easy!! We saw about 6 other guys and girls enjoying the early season trails, and have seen many more people breaking the bikes out in the last week or so.

As winter passes us by, and spring runs rapidly into summer, the chefs have been experimenting with some spring-time flavours in the kitchen. They had some lovely milk-fed Pyrennes lamb in last week, and the spring vege and flowers are brightening up the kitchen. We have done another couple of BBQ's already, and not just at work, BBQ season is here now in town too, with no fewer than 4 of the bars in town hosting barbies this weekend. Some of the newer dishes in The Lodge kitchen have a distinctly Italian twist, mainly due to the addition of Fabio in the kitchen. He also worked at Le Manoir with Gerwin for a number of years, and the standard of the food has taken another leap forward this year.

So, as I come to the close of another couple of weeks here in the Swiss alps, I leave you with news that we might be running a foodie week in the summer, where you get to spend a week learning from Gerwin and Fabio, (just make sure they do the washing up!) you can get in touch with us for more info. We are also putting together a tennis week, which Paul is looking at running in early September time. Of course you could always just come and lie in the hammock sipping a G & T watching the clouds pass you by, try some biking, perfect your golf swing, conquer new heights climbing, work on that tennis serve or.........Come see us to find out more!!

In the mean time, until next time,